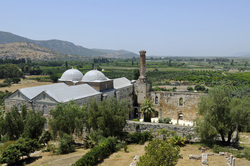 Archeologists mention that there is a possibility of an Apollon  temple in the place where the mosque was built. It was common in the ancient  times to built an Apollon temple next to Artemis temple since they are considered as twins. Apollo was the twin brother of Artemis, the god of prophecy. The mosque was built in 1375 (According to Christian Calendar,  According to moslem calendar 776) by the Architect Ali from Damascus, ordered by  Isa Bey, The Emir Aydin. Has 2 parts as courtyard and the prayer room. Mosque  was built with materials taken from former greco-roman buildings. Has 3 entrances. The west facade is made from the blocks of Marble from the cella of Artemision. In the center of the courtyard, there is a basin of octogonal shape for religious purifictions. It had 2 minarets. One was destroyed by an earthquake. Today it is the oldest active mosque in Turkey. It has been active since 14th century. In 1950s it was restored. Today only one out of two is standing.

Isa Bey Bath, the so-called Isa Bey Hamami is one of the most well-preserved baths from this period. An inscription kept in the Selcuk Museum and dated to 1364 refers to a Hamam which was erected during the rule of Isa Bey. Hardly anything remains of its originally magnificent appearance beyond the  stuccoed wall decoration, partially with coloured paint and adjoined domes. Total of ten domes with partially very valuable stalactite decoration only five  are preserved, while the main dome over the tepidarium is two-thirds collapsed.  The water treatment took place further to the south, where the  praefernium and  the vaulted warm water basin are still preserved. The baths were later altered  in the west by an additional building for women, a structure whose entrance was  reached by a side passageway according to Islamic tradition. This resulted in  partial alterations to the construction technique and the  structure of the  building. In the east of the baths, a row of nine premises have been revealed,  which were oriented towards a narrow street and which can
be interpreted as  shops.

Hamam II, an unnamed bathing complex, located to the west of the  Isa Bey Cami in an area used for agricultural purposes. These ruins, which until  recently functioned as stables, were first freed from the damaging effects of  tree growth, cleaned, and then protected from further vandalism by the erection  of a fence. This building is differentiated from the Isa Bey Hamam both in its  ground-plan and in its fittings, and can be classed  as younger on the basis of  its building technique.
View Larger Map- Isa Bey Mosque 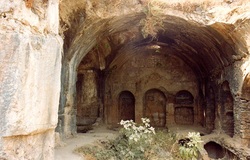 The Seven Sleepers, commonly called the "Seven Sleepers o Ephesus", refers to 7 early christians who lived in Ephesus in the 3rd century A.D, in the time of the Roman Emperor Decius. This was the time of persecution to the Christains. These 7 young men hid inside a cave outside the city of Ephesus around 250 AD, to escape from the persecution of Christians. Having fallen asleep inside the cave, they slept approximately 150-200 years and woke up during the reign of Theodosius II, They so hungry, they sent one of them to get a bread. The shop keeper was so suspicious when the guy tried to give him a 200 years old coin. He called guards and these 7 young man got arrested. Later on they are treated as holy people. Theodosius the Roman Empreror wanted to visit these 7 early Christians but by the time he arrived they all died since they were physically very old. They got burried into the cave they were asleep. Later on people wanted get burried close to these holy people.

The story is also mentioned in the book of Quran.  While not giving the number of youths involved, the Quranic version of the Seven Sleepers story largely parallels the Christian account. Unlike the Christian story, the Islamic version includes a dog who allegedly accompanied the youths into the cave, and kept watch at the entrance for the entire time that they were asleep In Islam, these youths are referred to as "The People of the Cave".
Ephesus Travel Guide by TransBalkan Tours is a fully licenced tour operator and a member of TURSAB. License: A 776.