​When to travel to Ephesus?

​Coldest time of the year is January and February. Average temperature these days are approximately 10 C /40 F. Almost never have any snow. Rainy season is in  between October and April. It hardly rains in the summer time. The warmest time of the year is July and August. Midday temperature rises up to 43 C/110F. Best time to visit Ephesus is April, May, October, November. This is the time the weather is neither hot, nor cold.

​How to go to Ephesus?

The other way of transportation is to take a bus from Istanbul. We do not recommend it although the bus services are very high in world standards. It takes approximately 9 hours to drive from Istanbul to Ephesus. In the winter time there may not be direct buses, therefore you need to take a bus to Izmir first and then another bus to Ephesus. Izmir to Ephesus is approximately 1 hour drive.

Railway system is not very much developed in Turkey. We would say the best way is to take a flight from Istanbul. If you would like to have a private tour. We can arrange you a private Ephesus tour starting from Izmir airport.

Kusadasi/Ephesus is also reachable by ferries from Samos, the Greek island. From 01st April to 31st October everyday there are ferries going back and forth.  Approximate cost of a ferry 30 Euro incl. tax (one way), 35 Euro incl. tax (round trip)

For day trips to Ephesus from Istanbul, below please find the links of  the airlines offering flights.

Selcuk is also accesible by train from Izmir Airport. The same train also go to Denizli where Pamukkale (Hierapolis) is located.

The Train schedule is as follows: (Click here for the official timetable)

Where to stay in Ephesus?

​There are sevaral options for visitors.
Staying in Izmir is not recommended, since Izmir city does not offer much for the travellers. Izmir is a big city having a population of almost 4 million. It has many hotels. But preferred more by business travelers. Izmir during rush hour has quite a lot of traffic.
Village of Sirince can be a good choice but going there is a liitle bit difficult. In Sirince Village, there are small hotels. One overnight could be interesting. More than one overnight could be boring.
Selcuk town is nice and very close to Ephesus but some of the hotels are not in high standards.

Our recommendation is to stay in Kusadasi and do the tour of Ephesus out of Kusadasi. Kusadasi has several beaches, nice restaurants and good hotels that you may enjoy. Kusadasi is a small coast town which has a great location. Kusadasi is 1 hour drive from Izmir Airport, 25 minutes drive to Ephesus and 3 hours drive to Pamukkale. It is a very safe town that you can enjoy couple of days. Kusadasi offers the most compared to Izmir, Selcuk and Sirince. We recommend to spend 2 nights / 3 days in Kusadasi. On the first day you can do a Full Day Tour to Ephesus, on the second day you can do a Full Day Tour to Pamukkale and on the 3rd day you can enjoy strolling in the streets of Kusadasi and enjoy the beaches. You should definitely stay in Kusadasi.
​Cruises calling to Kusadasi & Izmir Ports 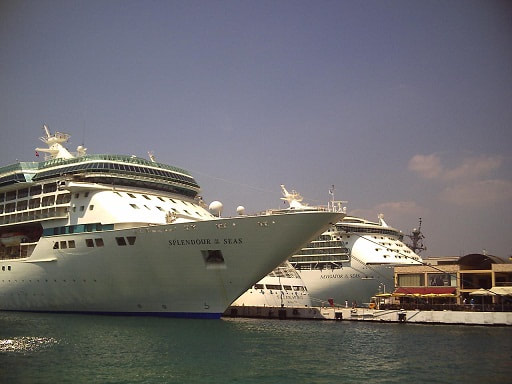 Kusadasi Port
Majority of the people who visit Ephesus come with cruise ships either
to  the Port of Kusadasi or Port of Izmir. Below please find a list of some of
the  cruise ships calling to both of these ports.

Cruise ships that calls to Kusadasi Port:
Izmir, is located at the western part of Turkey. It is the 3rd largest city of Turkey having population over 2.5 million people. The largest export port of Turkey. Known as Smyrna in the ancient times. First settlement dates back to 3000 BC. Since the modern settlement was made on top of the old one there is not much to see in down town Izmir. Higlight of the area is Ephesus. Ephesus is located 65 miles south of Izmir, an hour drive.