Ephesus Travel Guide
The symbol of Ichthys can be seen by the  visitors on the side of the State Agora. It is an early christian symbol before the cross. According to some biblical scholars why Jesus was crucified, was not identified for many years. Early christians used the term Ichthys which is the word for fish in the ancient Greek. Ichthys is written as above picture in the Ancient Greek. A word formed from the first letters of several words. It compiles to "Jesus Christ God's son Savior" in ancient Greek.
Why this stone piece located caused a suspission among many archeologists. Many think that this piece is belonging another structure and misplaced at later years due to an earthquake or a battle. Late 3rd century was the transition period from Pagan world to Christianity. Many early christians added christian symbols on the buildings, mainly pagan temples to christianize them. After 4th century, after christianity becoming the state religion of Roman Empire. Instead of going to a quarry and cutting a stone, many reused the stones for the construction of their new structures like this walkway. 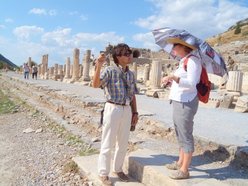 Tour Guide Denizhan Pekoz in Basilica
Basilica is made up of an impressive collonade situated in front of the Odeon. Decorated with Bull heads which symbolizes power. Basilica was the place where the Praetor, Roman magistrate who handed
out  justice, judged the court cases and solved the disagreements between tradesmen.  Basilica was also providing gathering opportunities for the people. This was a  roofed rectangular building. The word basilica is originated from the Greeek word Basileus which is the Greek word for Ceasar. Basilica meaning the Ceasars  Hall. Since it provided gathering opportunities, the word is adapted as a church  after 4th century after Christianity beacoming the state religion of Roman Empire.. 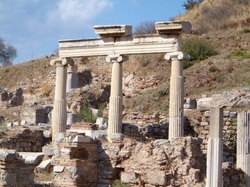 Prythaneon
The Prytaneion was the official administrative building or the city hall which housed the senior city officials. Can be translated to English as the presidency of the city. Prytarion had to approve all laws and decisons made by the advisory council. What characterized a prytaneion building as different from a bouleterion was an eternal flame or the sacred hearth of Hestia (Vesta - goddess of hearth & fire) in the prytaneion  which is kept burning eternally by the Curetes, the six priestesses of Hestia  (vestal virgins). The flames were taken from the Mount Olympos when a new city  was founded. In Turkey there are 7 mountains having the name Olympus. The real  one is close to Antlaya where there is a natural flame coming through the rocks.  From an architectural standpoint it was like a private house. It contained an  assembly hall, administrative rooms, the state archives and a dining hall in  which officials and foreign visitors were welcomed. In front of the assembly  hall there was a Doric courtyard. Some of the stones of the prytaneion were used  in the restoration of the Scholastica Baths. Three statues of Artemis, "big",  "beautiful" and "small" were found there. One life-size and the other double  life-size Artemis statues are kept in the Ephesus Museum in Selcuk.

Between Prythaneion and Memnius monument visitors  will notice a ramp named as the Holy Ramp or known as the sacred way. Providing  access to the Temple of Artemis. Chariots used to run on this ramp.  Chariot rods  can be seen. There are also traces of a street torch. A torch was used here, not  only to lighten the streets but for sailors as well serving like a light house.  Once the sailors see that torch is off than they understand something was not  going right in the city. Olive oil and salt was used for torches. In the Ancient  times only 4 cities had these kind of torches: Rome, Antiochia, Alexandria and  Ephesus which were the largest cities of Roman Empire. Since some portions of  the city was lit up, rich people were escorted by their slaves at dark. Slaves  used to carry a fennel stick for lighting flame. In mythogy Prometheus the rival  of Zeus used also a fennel to steal fire from Mt. Olympos. Zeus hid the fire  from humans to avoid them to cook meat however Prometheus cheated Zeus and stole  fire and distributed back to humans. When Zeus saw that fire is again used by  humans He punished Prometheus. He chained him and sent him to Caucasian  mountains where two eagles ate his liver.

Close to Memnius monument, Hermes figure with pharmacy & medical (snake) carvings are noticed on the semi columns. Hermes is the god of communication. Asclepius is the god of Medicine. Hygiene word is derived from Hygenia who is the daughter of Asclepius. The carvings represent a  hospital. Dr. Alexandros, Gineocologist Rufus and possibly the gospel writer Luke were among the doctors who served in this hospital.Asclepion was word
given  to these structure. Originated from the name of Asclepius, meaning the temple of  curement. Rufus is the one who invented the stitching in operations.
Translation  of some of his inscriptions and some of the medical utensils are displayed in  the Archeological Museum of Ephesus.

Ephesus Travel Guide by TransBalkan Tours is a fully licenced tour operator and a member of TURSAB. License: A 776.