Other places and attractions to visit near Ephesus

Below please find some thoughts of our guests who added silk and carpet weaving presentation to their private Ephesus tours:

After our tour, Denizhan gave us the option to visit three different factories but insisted on the one that make carpets. I was reluctant at first since I really was not interested in buying carpets, but I am glad he took us there. There we saw how they make silk (very interesting process) and how the carpets are made. The lady who explained to us the process of carpet making was very kind and knowledge. I am glad we went there because when we visited the Vatican, it really put into perspective the hard work and the time that it took to make the carpets and tapestries that hang in the Vatican. The big ones took seven years to make! They showed to us beautiful carpets and were very kind even though we were not interested in buying.

After the sights, we had a wonderful lunch in the shaded garden of a Rug Making Site. We got to see how rugs were made and were given the opportunity to purchase handmade rugs. While some may find the sales pitch unsavory, I didn't. You must see it for what it is, the rug making industry is a part of their culture and with pride they offer their products for sale. If you are not interested, you are free to walk away.

Then we were given a tour of an adjoining carpet weaving workshop. Denis explained that this was a government run facility to keep alive the skills of carpet weaving that are being lost in modern Turkey. We were shown how silk is extracted from silkworms and then woven into carpets.Brilliant! We were shown examples of carpets but again there was no hard sell!

After leaving Ephesus, we went to Carpetarium, a community carpet weaving centre in Selcuk sponsored by the Turkish Government. We had a delicious Turkish lunch, followed by a demonstration of carpet weaving by some Turkish ladies. Our daughters enjoyed trying their hand at the loom. Afterwards, we were shown dozens of quality hand woven carpets and though we did not expect to purchase a carpet that day, the sale was not hard sell though there was an expectation that we would buy.

​Camlik village takes 20 minutes drive from Kusadasi. A visit to the Village can be added to the "Ephesus and Kirazli Village" Tour Program. This is an outdoor museum was opened in 1991. It has one of the largest steam engines collection in Europe, most them joining the museum shortly after being retired from service. The museum is perfectly located, a few minutes away from Turkey most famous historical site: Ephesus. It sits on the premises of the former Çamlık station.

A visit to Camlik steam engine museum is recommended for travellers wo are interested in steam engines and railways.

For travelers who overnight in Kusadasi or Selcuk or Sirince or Izmir, day trips to the following sites can be made:

Pamukkale is 3 hours drive from Kusadasi town. Right by the natural wonders the ancient city of Hierapoolis was founded. Today a unesco heritage site. Its natural beauty and historical background attracts many travellers.

Pamukkale means cotton castle. There are two reasons why the area is name as cotton castle. One reason the white cliffs look like a castle made of white cotton, the other reason is that the area houses lots of cotton processing factories.
​Natural thermal springs which has high density of chalk inside formed glacier looking terraces on the areas where flowed for thousands of years. It is a unique site. Ancient Hierapolis was founded by Pergamum Kingdom. Due to the existence of thermal waters which healed people. Thousands of patients came to the area to get cured. The ones who were not able to be cured died and buried in the area. Today the site has the largest ancient necropolis. The number of thumbs like sarcaphaguses excavated is over 1600. The total number is expected to be over 3000. St. Philip the apostle lived in the city and martyred during the persecution time to the christians. This is a must see site for travellers.

We operate private tours to Pamukkale with licensed tour guides from Kusadasi, Selcuk and Sirince. For more information please click here.
If requested Pamukkale tour can be conbined with Laodicea or Aphrodisias. 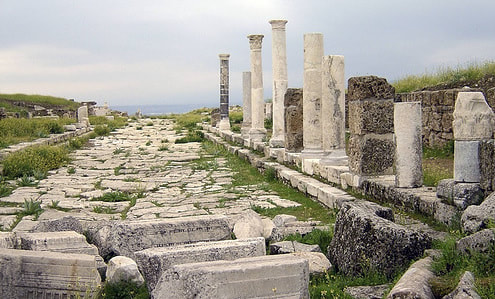 Laodicea
​Laodicea is located right across the ancient city of Hierapolis.
It was once a trade city which was known with glossy black wool and eye salve trade. Mentioned in the Book  of Revelation as the luke warm city. Recently Turkish archaeologists excavated a church dating to the time of Constantine. This is thought to be one of the earliest churches of the world. This site is recommended for biblical history lovers. 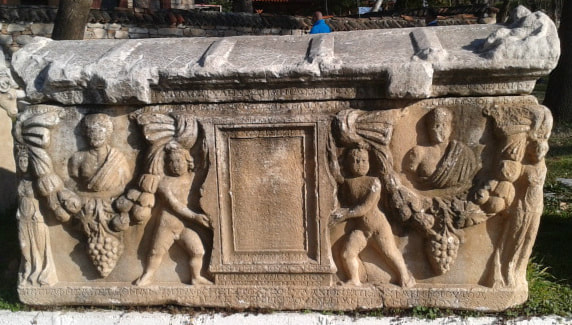 Aphrodisias
​Aphrodisias is 3 hours drive from Kusadasi town. Aphrodisias is derived from the goddess named as Aphrodite, the goddess of love. An artisan city known with sculpturors who made sculptures and sarcaphaguses with the local white marble. You can see the best examples of marble works in this city.

The site has the most well preserved ancient stadium in the world which has a capacity of 30.000 people. The huge pool at the south agora is breathtaking.  Read More...

Pergamon theater
Pergamon in the third century BC was one of the most prosperous cities of the ancient world. Known today as Bergama. Located 100 km. north of Izmir. Attalid Dynasty assigned the city as a capital for their kingdom named as Pergamon Kingdom. Pergamon has also a biblical importance. Mentioned in the book of revelation in the new testament among the seven churches of asia minor. The city was known as the city where the throne of satan is located.
Read More...

Miletus Theater
Miletus, once was the most prospereus city of Ionia. Had a population over 100000 people. It was known as the city of geniuses like Thales the philosopher, Hypodomos the civil engineer, Isodorus the architect and many more.
Mentioned in the Book of Acts chapter 20. After the riot started in 56 AD against Paul. Paul was sacked from the city of Ephesus. After a while he travelled to Miletus and send a letter to the elders of Ephesus and gave them a farewell speech before departing to Jerussalem. 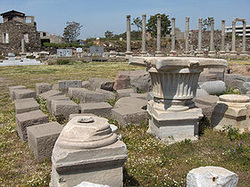 Smyrna Agora
From ancient Smyrna there is not much left. The remains of the ancient city is under the modern buildings. Smyrna is known today as Izmir. Izmir is the third largest city of Turkey.
Mentioned in the Book of Revelation known as the city of prosecution. 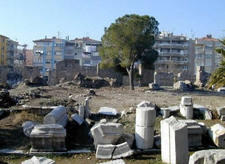 Thyatira
The modern name of Thyatira is Akhisar. There are not many things to be seen from ancient times. All the remains are under the modern buildings.
Recommended for travellers who are interested in Biblical history since the site is mentioned in the Book of Revelation. This city was a trade city which had many trade guilds. 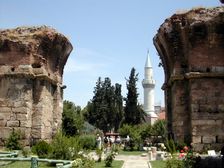 Philadelphia
The city of brotherly love. Founded by two Pergamon Kingdom's brothers. Known today as Alasehir.
A biblical city known as the faithful city in the Book of Revelation.
Again there is not much to be seen.
If you need more information or if you would like us to organize you a tailor made tour program including some of the sites above please contact us.
Ephesus Travel Guide by TransBalkan Tours is a fully licenced tour operator and a member of TURSAB. License: A 776.